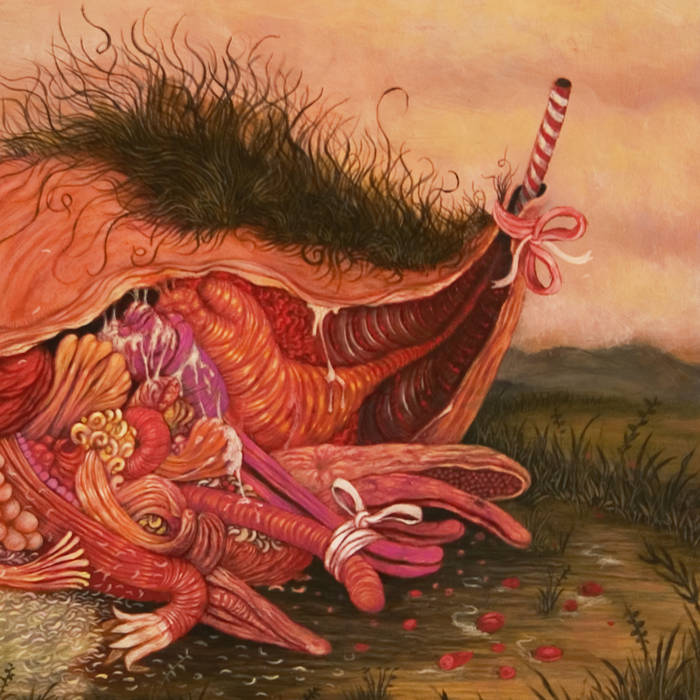 To look at one of Gregory Jacobsen's paintings is to view a world of oozing fluid, hilarious meat, and demented animals. Set that vision to music and you get Lovely Little Girls, the band Jacobsen fronts. LLG walks a path of which the foundation is dada, psychedelics, and Beefheart, one that has been trod by Butthole Surfers, Tragic Mulatto, and Idiot Flesh. Swirling sickness of songs are propelled by Eleanor Balson, a drummer whose style creates more than a beat while maintaining a beat. There is an insight that female drummers seem to have (think Katherina Ex or Mary Duchess of Saigon) that leads them to a place where the drum steps outside of 1-2-3-4 but not into Mathland. Also a standout is Alex Perkolup, who plays a guitar that razors noise into piercing fragments, a crack horn section, and Gregory J., singing lines like "Pork chop sloshed tight in the pants/bottom smack chest chop soft port pants" in a style that could be called Jack Brewer directed by Roger Corman. At twenty-minutes Glamorous Piles... is as exactly as long as it should be. Those who can slither into this filth and feel at home will be very much rewarded. --SS
-Z-Gun.com

APOP sent Lovely Little Girls' Glamorous Piles & Puffy Saddlebags as a consellation prize with my recent order. The disc presents six songs of DMT-inspired lunacy, complete with angular guitars and ape-shit vocals. Everything sounds chaotic and orchestrated like Beefheart circa Lick My Decals Off, Baby. Imitation proves the greatest form of flattery. It's a short, sweet love poem to the mules of 19th century Dutch child molesters. I like it better than what I ordered, whatever it was.
-S. Kobak of Apples & Heroin blog

Costume rock. Cabaret punk. Chicago No Wave recorded after 2002. These are all things that I'm really not interested in anymore, ever, but this CD, recorded in 2006 and released in 2007, is arguably all three of those things, and it's great. Why? Because it has real songs and the band kicks ass playing 'em. Lots of people can do one or the other, but doing them both at the same time has become surprisingly rare... I already knew this band could do it, not from any records (did they even have any records?) but on the basis of two excellent live shows from way back in 2003. Now the songs are more razor sharp and they've got a completely different lineup, a bit of a Chicago all-scar crew with actual decade-deep roots, Alex Perkolup on guitar (bassist in Flying Luttenbachers from 2001-2002, now with Cheer-Accident), Zack Pink Shoes on bass (I think he's one of those "cholos" from Lumpen), Eleanor Balson on drums (she rules), and of course Gregory Jacobsen on lead vocals with the mad lyrics about stuff like meat, hair, fat, guts, shit, you know, the greasy stuff. But anyone who knows this group already expects all that -- it's how well these nutso songs work as songs for the perfect 20-minute length that will seal the deal.
-blastitude.com

Bandcamp Daily  your guide to the world of Bandcamp